Laziness, willpower, and the weak link in your life. 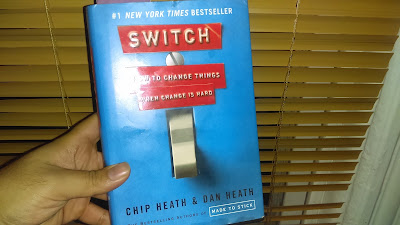 You can't only rely on will power.

The bigger the change, the more it will sap self-control.

It causes exhaustion of mental muscles which are needed to focus, inhibit impulses and persist when facing frustration or failure. In essence, you are exhausting muscles needed for change.

So it's important you respect the signs your body tells you.

Putting yourself in a position to win and succeed is obviously the best choice.

But many of us take on simultaneous goals where we get tired and run out of fuel because we are running on willpower.

With that in mind, when you have something hard to do, do it first. Before you know it, it's almost done.

Ironically, most advice given is to do the simple thing first and save the hardest for last.

Whether it's getting in shape, reading more or writing a book, decide what is the most important thing to you.

And don't try to simultaneously read a book a day, exercise 3hrs a day and write a book.


Instead, experiment with focusing on one thing.

Get up at 4am and workout.

Get up at 4am and write.

Your brain is recharged and you will knock it out first thing after waking up.

Why? This stops mental exhaustion.

When focusing on the most important thing to you at the moment in your life, you will eliminate decision paralysis. You won't freeze up trying to decide which to do.

Now this doesn't mean you get to neglect the other goals you have set. But you will do less of it. In other words, you're not completely ignoring any important aspect of your life. You're just giving priority on what is most important so you won't rely just on willpower when it gets tough.

For example, lets say you're reading 3 books a week and you're almost done writing your own book. However, you haven't put a lot of focus on your body. Your physical health seems to be lacking. So focus on the weak link. Decide to put massive efforts into that area and do less of the other stuff.

It's basically adapting to how your life currently is. You can still do the other things, but your big burst is done focusing on that one thing.

This isn't any wish washy opinion. There is actual science behind it. There were studies done on willpower.

When people were placed in a room with mouth watering cookies as oppose to broccoli, studies showed people in the room with cookies were more likely to spend money. Why? Your mental energy to fight off temptation drains your willpower and leaves you vulnerable other things you are trying to do...like save money.

Many people believe cliches such as you have to be tough and try to do it all.

But really it's not only character traits that define a successful change.

Of course, it's part of it, but not the complete story. You have to put yourself in a position to win and not always try to be heroic.

Don't beat yourself up.

Focus on the weak link in your life and put majority of your energy on that.